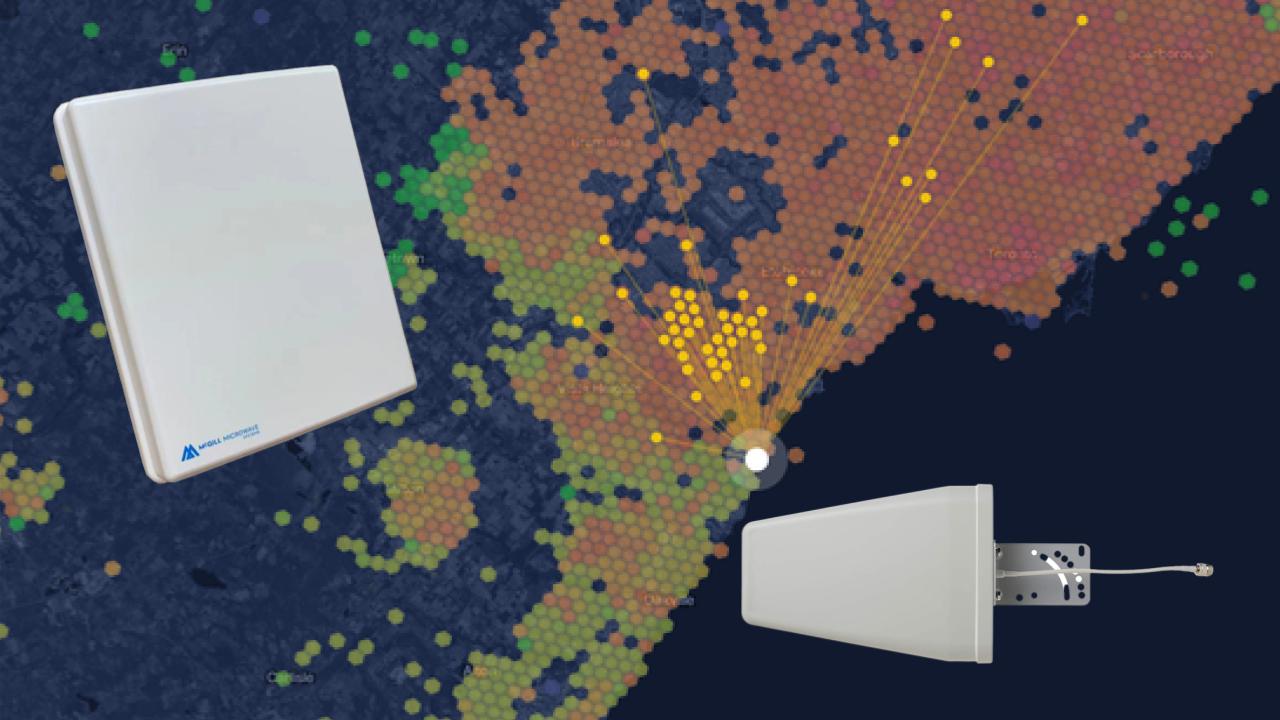 Helium miners ship with Omnidirectional Monopole antennas. These are the same type of antennas that are used on Walkie-talkies and Wi-Fi access points. Omnidirectional antennas radiate and receive energy from all directions. They work well in most situations where you have an equal distribution of Helium hotspots all around you. Antennas that ship with Helium miners usually have low gain – typically 2 dBi or 3 dBi.

Many Helium miners have upgraded their antennas with higher gain omnidirectional antennas such as the one below. These antennas focus the energy relative to a lower gain equivalent. They have a narrower beam and are able to get larger range at the expense of broader coverage. Depending on your environment, a higher gain antenna can result in more witnesses and therefore higher HNT earnings.

This picture by RAKwireless shows how the antenna beam narrows with increasing antenna gain.

What if you want to focus the energy into any one particular direction? In this case you would need to use a directional antenna.

The above picture shows the radiation pattern of a directional antenna. You can see that there’s more energy in the front relative to the back lobe.

Let’s take a look at two situations where you might want to consider this type of antenna:

Hotspots around you are not uniformly distributed

In the following picture you can see the absence of Helium miners to the left in the water and a high concentration of miners to the right of the miner in focus. As a result it doesn’t make sense to send any beacons and you won’t be receiving any beacons from the ocean area.

In this case it makes sense to make a tradeoff – i.e. for an antenna to instead focus its energy to the right.

Hotspots in one direction have better transmit scale than other directions

In this picture you can see the regions with the red Hex’s in the upper right quadrant of the picture relative to the lower left quadrant where there’s more green. Green indicates transmit scales closer to one.

In general it’s preferred to receive beacons from the green area or higher transmit scales as the HNT rewards are higher.

Where are Panel Antennas Used?

If you live in a city, you’re likely surrounded by panel antennas. These are used by cell phone companies. They are also called sector antennas. Panels direct their energy in a specific direction.

Where are Yagi Antennas Used?

Yagi or Yagi-Uda antennas are used for TV reception, cell phone boosters and other applications.

In both of these situations, you generally know in what general direction the TV transmitter or cellular base station is located. The antenna can then be pointed in that direction to facilitate focused signal reception. The Yagi antenna pictured above provides broad band coverage. It operates across the frequency range of 700-2700 MHz so it covers both of the major Helium bands – US915 and EU868.

Let’s take a look at some of the differences between the two directional antennas:

Panel antennas have a wider beam, which results in greater coverage relative to a Yagi Antenna when the signal sources are spread over a larger area. A Yagi Antenna is able to provide much higher gain relative to a Panel Antenna.

As well, a high gain panel antenna can be quite large and heavy. A high gain Yagi can be
long, but otherwise is very light by comparison. Many interference hunting professionals use handheld Yagi antennas to exactly pinpoint the source of interference.

There is no major difference in cost when it comes to panel relative to Yagi. That being said, panel antennas from reputable manufacturers like McGill Microwave do tend to be on the pricier side of things.

Yagi or Panel which one should I pick?

If you are budget constrained and have to pick one over the other, we recommend picking the panel antenna. Note that panel antennas are tuned to operate in a specific frequency band so you can’t use a US915 in Europe or an EU868 Panel antenna in USA. These antennas provide a good balance between directional attributes and gain relative to an omnidirectional antenna.

Also panel antennas are not as focused as Yagi antennas and that can be a positive or a negative depending on your situation.

If you are not budget constrained and can afford an experiment or two, we suggest getting both and trying them out. When running an experiment with antennas, it’s also recommended to try each one out for a week at least to see the effect on HNT earnings. You also may want to study the RSSI and SNR readings from specific beacons.

In this post we have reviewed directional antennas and how they might be beneficial for certain Helium deployments. We provided two specific scenarios. If you are interested in experimenting with a directional antenna to see the effect on earnings, we recommend the following antennas: